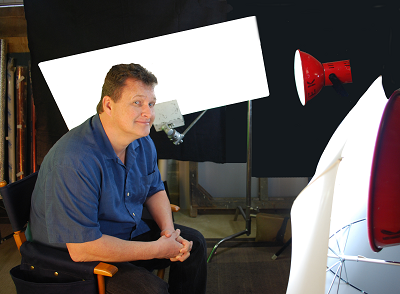 Rick Toone, a video expert and avid social media practitioner, will lead the Social Media Professionals Track at the 2012 SoMeBizLife Conference, May 30 at Delaware Valley College in Doylestown. In addition to moderating the entire track, Rick will speak along with Cookie Biggs and Maria Martino Evans in a session entitled “Making the May-September Relationship of New Media-Old Media Work for Your Clients.”

Rick is known as someone to listen to when it comes to video. He lived in Los Angeles for 20 years and worked on film sets around the world. He has shot in 12 countries, filmed a dozen movies and several HBO comedy specials, and was the propmaster and graphic designer at the Oxygen Network at its inception. Despite that resume, Rick concentrated primarily on television commercials.

Rick has done more than 1,000 national spots for major brands from American Airlines to Mazda (with its introduction of the Miata), Pepsi, AT&T, the Got Milk campaign which spanned several years, Yahoo’s introductory commercials, American Express with Jerry Seinfeld, Guinness, Oil of Olay and hundreds more. He’s had over 50 spots air on the Superbowl and contributed to numerous Olympic, Academy award and MLB commercials. The stars he’s worked with comprise Hollywood’s A list from A to Z: Amy Yasbeck, Kevin Costner, Charlie Sheen, Bruce Willis, Shaq, Rachael Hunter, Lucille Ball, Candace Bergen, Jeff Gordon and Dweezil Zappa just to name a few.

He has made it snow in the desert, rain in the ocean, perfected the cheese pull (pizza tech talk) and set the stage for award winning comedy specials. His expert eye and creative knowledge helped to craft the persuasive message each commercial sought to convey. Nominated for an Emmy for “The LA Thing,” Rick has the honor of knowing several of the commercials he helped create are in contemporary art museum collections and have won many Clios and other international awards. Working with Academy Award winning directors and cinematographers was just a normal day for Rick.

Always enhancing the set with his design sense, his ability to make everything better and his at ease people skills made him one of the most sought after craftsperson in the film business. Now he’s bringing his years of Hollywood experience to the people who know that to stand out and get their message heard they need to incorporate video into their messaging. By choosing the right message along with the right setting and using the many tools available, any individual or company can compete on the same level as the clients Rick once worked with.

In addition to his video experience Rick has licensed products he created, was the founder and creative director of MobiStories, a children’s digital book publisher with 45 interactive titles and 17 apps in iTunes and speaks frequently on video and social media.

Rick’s knowledge and experience will get you to the next level. Let him teach you, how you, can Shoot Better Video.